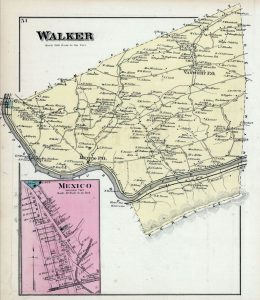 Walker Township, Juniata County, PA is primarily a rural agricultural area of 29 square miles of which 98.37 percent is land and 1.63 percent is water. The Juniata River, along the picturesque Tuscarora Mountains, runs through the southern part of Walker Township. Sportsmen enjoy hunting and fishing opportunities in the Township, and Muskrat Springs, off of William Penn Highway (Route 22) provides boat access to the Juniata River. Camping along the River is enjoyed by many. Buttonwood Campground, presently owned and operated by the Dennis McFarland Family, brings many campers to Walker Township throughout the year. Land bordering Walker Township includes: Fermanagh and Fayette Townships to the north; Delaware Township to the east; Turbett Township to the southwest; Port Royal Borough and Milford Township to the
west; and Perry County to the south.

Early settlers included Germans William White, George Calhoon, Andrew Lycon, and others. The Indians were upset and attended the “Council of the Six Nations” meeting in Philadelphia under Governor Thomas. The cabins constructed by these early settlers were thereafter burned by the Indians. Upon the opening of the Land Office on February 3, 1755, William White and John Lycon took out land warrants—White for 200 acres and Lycon for 325 acres. John Calhoon then purchased land from White. White and Calhoon’s tracts were above the James Patterson tract at the mouth of D. O. (Doe) Run. Captain James Patterson was the owner of the land on which the most densely populated Walker Township village (Mexico) is now situated. “New Mexico”, as it was called, was laid out on the west side of D. O. (Doe) Run that flows through Walker Township and into the Juniata River. The construction of Route 22 (formerly the “turnpike”) later changed the intended original plan. Captain James Patterson, a veteran of many Indian conflicts, died in 1772 and is buried in the historic Mexico Cemetery. The last recorded burial in this cemetery was in 1871. Family names found there include: Landis, Miller, Kingery, Gingrich, Hartman, Thomas, Toomey, Leonard, Motzer, Shelley, Knox, Stauffer, Pearson, and Cleck A site located on the Shearer Farm (near Mexico, along Wagner Road) served as the burial ground for at least three great Indian tribes.

Stone houses were constructed in Mexico by James Thompson who opened a store in one house in 1814. This store continued to operate under various ownerships, including Harold Hack, for many years. The current owner of the former store is Charles Duncan. The Mexico post office was established in 1821. Walker Grange No. 786 organized May 26, 1884 with eighteen charter members. The first master was Luke Davis, and the first meetings were held in the Red Rock Schoolhouse. In 1919, the Grange building was purchased in Mexico. This building first was used as a church and then a factory before becoming the Grange Hall. In 1996, the Grange bought what is now the H. E. Hack Memorial Hall, Walker Grange Annex. This building is large enough for serving banquets and is used extensively.

Another prominent early settler and landowner was John Hamilton, whose family was from Chester County, PA. Mr. Hamilton acquired 400 acres of land and, in 1772, began building a stone house upon it. In part of the house, he opened the first store in Walker Township in 1774. He called the house “Fermanagh” after the township which at that time was Fermanagh (not Walker) and was still part of Mifflin County. (This land became part of Juniata County in 1831, and part of Walker Township, not Fermanagh, in 1822). John’s grandson, Hugh Hamilton, completed the final addition to the house in 1869. Heirs of the Hamilton Family owned and occupied the house until 1896 when it was sold to John McMeen. This is the stone farmhouse between Centre and Locust Run presently owned and occupied by Charles and Shirley Saner. At the opening of the Revolutionary War, John Hamilton was the captain of a company of local volunteers who served in several campaigns during the War. In 1787 Captain John of “Fermanagh” moved to Harrisburg and died in 1793.

Churches were important to the early settlers. In 1790 in a tent on the site of the old graveyard (Adams Cemetery), the Presbyterians started meeting. Land was bought in 1792 and the first church in what is now Walker Township was built on that site. This church building was used until about 1840. The United Presbyterian Church descending from this original congregation is now located along William Penn Highway (Route 22) in Mexico, PA. In 1801, a meetinghouse for use by all denominations was built on land owned by the John Hamilton heirs. The Island Grove Campground is still in existence and hosts evangelistic meetings each summer. Other early churches include the Free Springs German Baptist Church near Van Wert and the Evangelical Church at Locust Run which were both built in 1861. Today about a dozen churches can be found in
Walker Township, which has an estimated population of over 2,600 people. In addition, the large population of Amish in Walker Township meet and worship in homes.

The Walker Township Elementary School built in 1958 by John E. Groninger, Inc. replaced the one-room public schools of the township. However, there are four Amish one-room schoolhouses in Walker Township. Because of this, there are 29 percent of children in Grades 1-8 in private schools compared to 16 percent across the State. In Grades 9-12, only 4.8 percent attend private schools compared to 13.1 percent in PA.

The village of Van Dyke or Centreville became well-known because of the Juniata Stage Company. In 1857, it began running a line of stages from Clarke’s Ferry to Huntingdon through Van Dyke. John Stauffer opened a tavern in 1808 which continued operating under various ownerships for many years. It was a noted stopping place for stages. After completion of “the turnpike”, it became a stop-off for wagon travelers also.